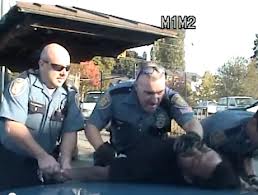 In response to video of a controversial SPD arrest at 23rd and Union was released late last month, the Seattle King County NAACP and the No New Jim Crow Coalition group are holding a rally Saturday against police brutality.

The DOJ initially backed down when the police refused to give them this video. It took the threat of a lawsuit by a private attorney to force the SPD to show this video.

We cannot rely on the City of Seattle or the Department of Justice for police accountability. Time and time again, we see who the Seattle Police Department is best at protecting: themselves. We can no longer leave accountability in the hands of the police to police themselves. Instead, we leave this up to the will of the people.

Join this rally as we stand with Leo Etherly, and all victims of police brutality. This rally will be located at the original scene of the crime, on 23rd and Union.
–
GOALS

–Bring pressure on the Department of Justice (DOJ) and the SPD to allow the release of all videos showing use of force to the general public in an expedited manner—without threat of lawsuits.

–Create impetus to force a policy of greater scrutiny on the small number of officers who are repeatedly involved in questionable use of force incidents.