Africatown Celebrating our History…Planning Our Future

Also last week Africatown Community Land Trust was awarded an equitable development grant of $1,000,000 to help fund Africatown Plaza building to be developed with Capitol Hill Housing on the Midtown Center site and $75,000 for organization capacity. The overall development costs for the project are estimated at $42,000,000.

Now, this weekend join us to plan for the future of the Central District that makes the essence of the activation permanent at 23rd and Union and throughout the CD!

On Friday the Design Town Hall will feature Walter and Nmadili will share ideas join Dr. Marcia Arunga with a featured performance by Dadabass.

After being inspired by the work and ideas of visionaries Walter Hood and Nmadili Okumabua and memories of the CD as told by Dr. Marcia Tate Arunga on Friday at the Design Town Hall, Saturday we will take to bringing our own ideas to life with an all day Design Cipher workshop.

Four sites in the Central District including Black community landmarks Seattle Vocational Institute and Bryant Manor will be reimagined as a local “Black Wall Street” or “Wakanda”, but these places could be anywhere we are: Renton, Kent, Federal Way, Leimert Park in LA, Harlem, Southside Chicago or Third Ward in Houston!

Let’s imagine and design thriving Black neighborhoods of the future. Places where our well being is the focus, our legacies are honored, our spirits are nourished, our genius is cultivated and our collective futures are bright!”

Walter Hood is the Creative Director and Founder of Hood Design Studio in Oakland, California. Hood Design Studio is his tripartite practice, working across art + fabrication, design + landscape, and research + urbanism. He is also a professor of landscape architecture at the University of California, Berkeley and lectures on professional and theoretical projects nationally and internationally. Walter designs and creates urban spaces and objects that are public sculpture. Believing everyone needs beauty in their life, he makes use of everyday objects to create new apertures through which to see the surrounding emergent beauty, strangeness, and idiosyncrasies of urban space. http://www.hooddesignstudio.com/

Nmadili Okwumabua is an Atlanta based architect and CEO of Southern Sahara, a design consultancy specializing in the research and development of modern African architecture. Nmadili is also the founder of Founder of the Community Planning & Design Initiative Africa and a professor of African Architecture & Urban Design at Kennesaw State University in Atlanta, Georgia. https://www.cpdiafrica.org/the-founder/

Copyright © 2018 Africatown Seattle, All rights reserved.
You are receiving this email because you have attended or expressed interest in an Africatown event. 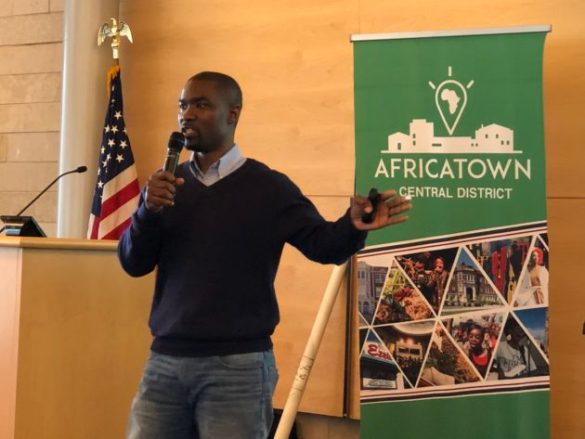 Africatown has been awarded a major grant as part of more than $5 million in funding for equitable development in Seattle.

“Seattle is facing an affordability crisis, which has displaced far too many and left behind many of our neighborhoods and businesses,” Mayor Jenny Durkan said about the grants. “To tackle these challenges, our City is investing in community organizations who are leading the way in creating true economic vitality and opportunity within Seattle’s most underserved communities.”

Africatown will receive $1,075,000 for “capacity-building” and “development expenses to include affordable commercial space to the Midtown affordable housing project,” according to the City of Seattle announcement of the award.